May Day events in the South

If you have an event you’d like to add here, please comment and we’ll be sure to add it!

This was passed along to us by the Committee to Stop FBI Repression. Follow this link to register for the conference. – hastenawait

The conference will be held Saturday Feb. 19 at the UNC Law School in Chapel Hill, NC, from 10:00AM to 5:00pm. Please register now.

You can make an online donation to support the conference – please put “FBI Conference” in the “designation” section of the donate form.

Directions and parking information are available on the UNC School of Law website.

10am – 10:10am Opening remarks from conference organizers

10:10am – 10:30am Subpoenaed activists Meredith Aby and Steff Yorek give overview of case

History of FBI and Political Repression Against People’s Movements.

Grand Juries, Material Support of Terrorism, the Legal and Political Context of the September 24 Raids

Sponsors of this conference include

David Gilmore, the federally-imposed-administrator of the Housing Authority of New Orleans, and Mayor Mitch Landrieu, want to make life even more miserable for working class New Orleanians by demolishing the Iberville Public Housing development. To add insult to injury they have given the contract to greedy developer Pres Kabacoff, who drove hundreds of poor families from St. Thomas and still, a decade later, has not built the 100 off site apartment he promised.  But, to carry out their crime, HANO, Landrieu, and Kabacoff need a multi-million dollar grant from the Department of Housing Urban Development. Join us Saturday, December 18 as we demand:

·         No to a HUD Choice Neighborhood grant to demolish Iberville

Defend Julian Assange and the right to dissent! Information about global, imperialist, governmental corruption has been disclosed from diplomatic cables leaked to the public by WikiLeaks. This information brings new light to the war abroad, and at home. On September 24th, the homes of seven activists and an anti-war office were simultaneously raided by the FBI. In total, fourteen activists from Illinois, Minnesota, and Michigan …have been handed subpoenas to testify before a federal grand jury. These activists and many others came together to organize the 2008 anti-war marches during the Republican National Convention in St. Paul.

These are attacks on dissent in general, and free speech in particular and it is our duty to respond!

We will be meeting at the corner of Centennial and Marietta St. in front of the CNN center.

At 5:30, there will be a public reading of selected WikiLeaks cables.

George Galloway is a British politician, author, broadcaster and former Member of Parliament. He is the founder of the Respect Party and is a peace advocate. He is most known for his outspoken views on Palestinian rights. Mr. Galloway is an avid supporter of MLFA and is coming to speak about important issues affecting you. Don’t miss this opportunity to listen to a world-renowned activist speak about his experiences on the front lines of the fight for peace, liberty and equal justice for all.

The Muslim Legal Fund of America is a 501(c)(3) nonprofit charitable organization that supports legal cases across the country which impact civil rights, freedoms, liberties and principles of justice in America. MLFA is comprised of staff, volunteers and supporters from all walks of life who have one thing in common: the belief that treating people unfairly because of their religious beliefs undermines the core values that make America great.

END_OF_DOCUMENT_TOKEN_TO_BE_REPLACED

The Mountains Tremble: A Reportback from the Revolution in Nepal

In the first half of 2010, two revolutionary journalists, Eric Ribellarsi and Jed Brandt of the Kasama Project traveled to Nepal to report on these events. Their presentation will tell the story of this revolution, the current situation in Nepal, and feature video and photography from their journey.

Presented by the Southeastern Sociological Association (SSA) and the National Organization for Change (NOC) at Southeastern Louisiana University (SELU).

Students from across the state of Louisiana (including high school students) are protesting against devastating budget cuts to education. They are gathering at the state capitol on November 10 to voice their outrage. A broad united front of students and those who stand in solidarity with them has formed across the state, inclusive of groups as ideologically diverse as liberals, anarchists and communists. (Though certainly the radical leftists are a minority, albeit a highly-active and vocal one.)

The latest round of cuts to higher education totals $35 million, while Republican governor Bobby Jindal is attempting to borrow $25 million to build a new juvenile prison facility.  Two-hundred eighty million have already been cut since 2008. The new cuts would eliminate 109 full-time jobs in the state university system, while entire academic programs are being liquidated; for example, at Southeastern Louisiana University, the degrees in French and French education are being cancelled, despite the fact that the French language is an important aspect of Louisiana’s cultural heritage.

It’s telling that the Jindal administration is so eager to cut funding to public higer education, in effect further gentrifying it and adding more bodies to the reserve army of the unemployed,* and is at the same time eager to expand the prison industrial complex in this state. Louisiana already ranks near the bottom among U.S. states in terms of education, and is the leading incarcerater in the world. This shows where the Baton Rouge government’s sympathies lie – certainly not with the broad masses of the people. Jindal and his cronies in Baton Rouge have been open about the fact that they would like to see education completely privatized. 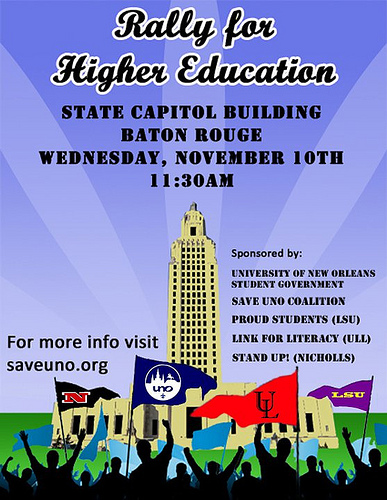 *I will use the example of SELU again to demonstrate the effect that these cuts will have on working class students. SELU has been historically one of the most affordable universities in the region. Relatively low tuition allowed many working class students to attend this university. In order to compensate for the budget cuts, SELU raised tuition 10% this Fall, as authorized by the GRAD Act, and will continue raising tuition until it reaches the southern regional average; this could take up to six years.

Paul Rainwater, the Commissioner of Administration and the main budget architect for governor Jindal, perversely said, according to the Times-Picayune, that “the actual cuts to colleges aren’t as severe as the administration’s detractors have said. When increased tuition and fees are factored in, the cuts amount to $88 million since 2008.” (This appears to be a paraphrase.)

I love this BS capitalist logic. Actually, it’s not BS if we understand that “capitalist logic” means logic that is favorable to capitalists (i.e., the actual rich people who own everything). He’s saying that the cuts aren’t that bad because increased fees and tuition make up for a portion of the cuts. They in fact do that. But who benefits from increased fees and tuition? Certainly not the vast majority of students who attend schools in the state university and technical college systems.

These cuts negatively impact the working class. More fees and higher tuition are not something that should be welcomed by a generation of students who are already burdened with historically-unprecedented levels of debt, who are working one or more low-wage (typically service industry) jobs, and who will possibly never pay off their student loans. That higher fees and tuition are helping to offset slightly the severity of the cuts should not offer much comfort to such students. What we are seeing in the midst of the worst structural crisis of world capitalism since WWII (among many other horrendous effects) is the further gentrification of education. Public education was originally created to open up education to people who are not wealthy (at least that intention was part of the picture). Now that our public universities and technical colleges are being slashed, education is becoming more and more the privilege of elites. The capitalist class will not stop until they steal every last thing from the people, or are overthrown by a revolutionary workers’ movement.

For more information, visit Occupy Louisiana and Stand Up for LA.